The Birth of Portraiture: Alexander The Great and His Successors

Drawing on the rich holdings of the Nickle Numismatic collection, curator Marina Fischer explores the life of Alexander the Great and his successors through their portraits on ancient coins.  Tiny masterpieces of Hellenistic art, these ancient coins record likenesses and suggest the distinctive personality of their subject’s.

A portrait is typically defined as a representation of a specific individual. It does not merely record someone’s features, but says something about their character and personality, offering a vivid sense of a real person’s presence.

The Birth of Portraiture: Alexander the Great & His Successors exhibition explores the life of Alexander the Great, his friends and generals who succeeded him after his death, and the later Indo-Greek Kings in Asia between the 3rd and 1st centuries BCE – through their portraits on ancient coins, the unprecedented realistic representations of the human likeness.

The tradition of portraiture in the West extends back to antiquity and particularly to the Hellenistic period (323-30 BCE), where lifelike depictions of distinguished men and women appeared on coins. After many centuries in which cold, idealized, generic representations had been the norm, distinctive portrait likenesses began to appear at end of the 4th century and the early 3rd century BCE, starting with Alexander the Great (356-323 BCE). This change reflected a new growth of interest in everyday life and individual identity as well as distinctiveness.

The portraiture of the ruler was an effective and persuasive means of projecting the qualities of the monarch. This style, expressed in the serene images of the king, is intended to perpetuate the transcended human limitations of the otherwise mortal ruler. These portraits are masterpieces of Hellenistic art, depicting in fine detail not only the person’s features about whom we often know so little, but also indications of how they are intended to be seen.

In antiquity, the portraits functioned just as images in the popular culture today. Our relatively recent obsession with selfies, the self-portraits posted on social media, has the same origin as the Hellenistic coin portraits, which function as a self-study with the aim of a better understanding of oneself. 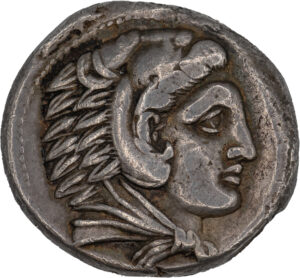