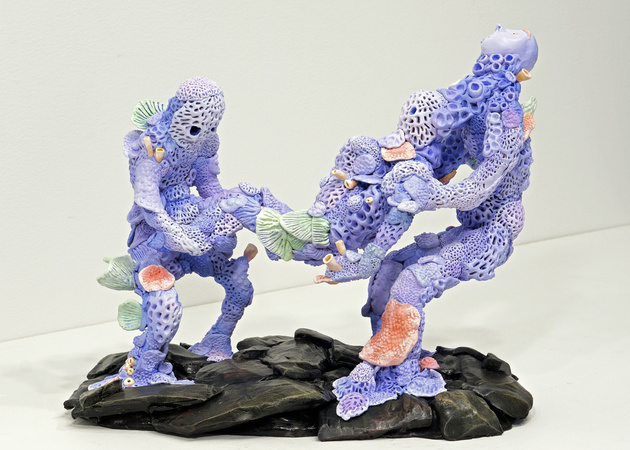 DaveandJenn: A Natural History of Islands

DaveandJenn: A Natural History of Islands presents recent sculpture, a way of working that departs from their earlier landscape paintings. Their sculpture mixes fact with fiction, mythology with history, science with speculation just as readily as they mix media.  They are presented within a gallery space designed to animate them, designed to give them the appearance of floating within an ecosystem.  Their sculptures can be interpreted as unsettling portraits that are flawed and invincible and live between pathos and hope.

David Foy and Jennifer Saleik have been collaborating together as DaveandJenn since 2004. Following their graduation with distinction from the Alberta College of Art + Design in 2006, they quickly became known for their complex and layered paintings. They have been shortlisted for the RBC’s Canadian Painting Competition (2006,2009), awarded the Lieutenant Governor of Alberta Biennial Emerging Artist Award (2010) and longlisted for the Sobey Art Award (2011).

DaveandJenn: A Natural History of Islands is presented within Series, an ongoing Nickle Galleries program and is curated by Christine Sowiak.